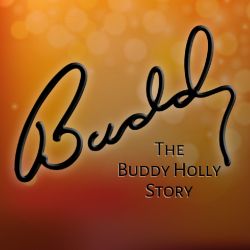 Experience the ups and downs of Holly’s ‘budding’ musical career as he strives to fulfill his potential genius. The heart-warming tale of an small town all American boy is told with care, detail, and humor. Buddy — The Buddy Holly Story finally explodes into a celebration of youth and lust for life in a re-creation of his last concert at Clear Lake!

This immaculately staged production gives some of the nation’s best musical talent the chance to perform Buddy Holly’s music as it will always be remembered and always should be performed — with youth, joy and boundless enthusiasm!

If you weren’t born then, or were too young to be a part of this exciting period of musical history then you won’t want to miss out on the electrifying party that is Buddy — The Buddy Holly Story! Featuring smash hits: “Oh Boy”, “Rave On”, “Peggy Sue”, and “That’ll Be The Day” — all from the golden days of rock ‘n’ roll, when the ‘doo-wops’ and ‘ah hey, ah hey, heys rang out from every juke box!