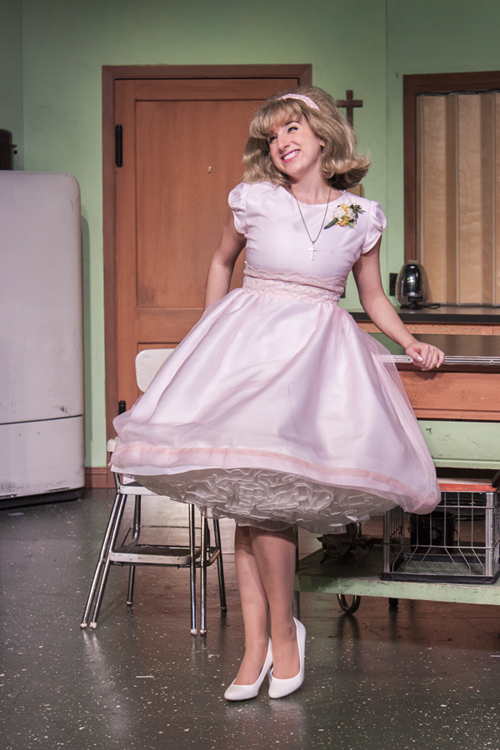 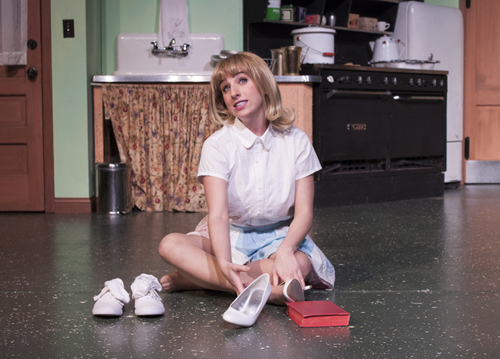 Where are you from?

I am originally from Rockton, Illinois, and I graduated from Millikin University, also in Illinois.

Which character do you play?

I play Beverly Signe Engleson, who becomes known as Signe as she gets older. In Parts 1 and 2 of the Church Basement Ladies series, she is known as Signe, but since Parts 3 and 4 flash back to her youth, here she goes by Beverly. Same character, different name, which can be confusing!

I love Beverly’s spunk. She is intelligent and inquisitive about the world around her, and isn’t satisfied with swallowing any answers that are spoon-fed to her. She wants to figure out life’s questions for herself. Of course she can be a bratty teen at times (not that I ever gave my mom any attitude…. no… of course not…), but she loves her mom and the other people in her church and has the utmost respect for them.

Do you have any personal connections with being a Church Basement Lady?

I most certainly do! I was raised in a Norwegian Lutheran Church, and my grandmother was a church basement lady through and through – she was actually the financial secretary of her church!  My parents were both charter members of Cross and Crown Lutheran Church in Roscoe, IL, where I attended my whole life until I went away to college. Putting on the Confirmation robe for this show felt surreal the first time because it looks exactly like the one I was confirmed in when I was 14. And my great-aunt makes krumkaka every Christmas, though thankfully I don’t have to endure any lutefisk!

What is it like being a Church Basement Lady?

My favorite thing about these shows is the heart with which they are written. These women fiercely love each other, and that bond is very special. I love watching them grow and change and deal with the events, both big and small, of everyday life.

What is your favorite part of your role?

My favorite part of my role in this show is getting to sing “Growing Up, Letting Go” every night with Carrie SaLoutos. It is such a beautiful moment and everyone can remember a similar moment in their own lives where they are acutely aware that everything is about to change. I hope that songs means as much to audience members as it does to me.

What is your favorite part of the show?

My favorite part of this show is seeing a side of Karin that we haven’t really seen before. I won’t spoil it for those who haven’t seen the show yet, but let’s just say that Karin isn’t afraid to say what’s what when push comes to shove!

How many Church Basement Lady shows have you been in?

This is just my second! I’m so lucky to be working with the goddesses of the Church Basement Ladies world: Nikki Savitt, Carrie SaLoutos, and Kay Francis!

How do you feel about the word Uff Da?

I love it! Having spent a good amount of time in Minnesota with another theatre company before I came to the Creamery, it was already incorporated into my vernacular, but I have to say that it makes a resurgence in my vocabulary while we are working on the show!

Have you acted at the Old Creamery Before? If so, in what shows?

I recently played the hysterical fiancée in Cash On Delivery and will be back to play a spunky gal named Sally soon in A 1940’s Radio Christmas Carol. I have done several TYA (Theatre for Young Audiences) shows at the Creamery including Cinderella, Stuart Little, and The Velveteen Rabbit, and I also adore being a camp director for Camp Creamery and working with the young thespians of Iowa.